There is a good opportunity to test the proposal of this blog for real after the next elections in Amsterdam. The 45 seats in the Council go to some 10 different parties. The biggest party is always de PvdA (social-democrats) with something between 12 and 20 seats. The next three biggest parties usually have some 6 to 10 seats. The other parties have a few or just one seat. This makes the PvdA the inevitable coalition leader. See the graphic below from Wikipedia or the historical data on the composition of the Council since 1962. In other words, the results are already known before the election. The question to be answered by the elections is: who will the PvdA make a coalition with? Now, what if there are no coalitions and a majority of the council agrees to draft job descriptions for the 6 to 8 eldermen? Then the electorate of the four big parties can spread their votes freely over all the 10 (or more) parties. This improves the representation of the city and the grip of the big, inevitable PvdA on the city politics will disappear.

The six, seven or eight eldermen on the other hand then have to please the majority of the 45 seat Council. They can not count on their coalition majority, but also have to listen carefully to the wishes of the smaller parties. At the same time, the eldermen will strive for consistency of their policy and will strive to stay within their budget. Not any wish can be granted, good and informative debates about the issues themselves are required.

In order to prevent a coalition to form I have joined one of those second-biggest parties: D66. I will plea to not form a coalition with PvdA and call for the rest of the Council to not support a coalition to be formed. The list of D66 candidates for the election D66 will be 30. I am placed at position 44. Members of the party can vote me up in an internal procedure until September 19. If I make it on the ballot then I need a few thousand individual votes in the elections to get in the Council. Only with the help of (national) mainstream live television talkshows this is feasible. 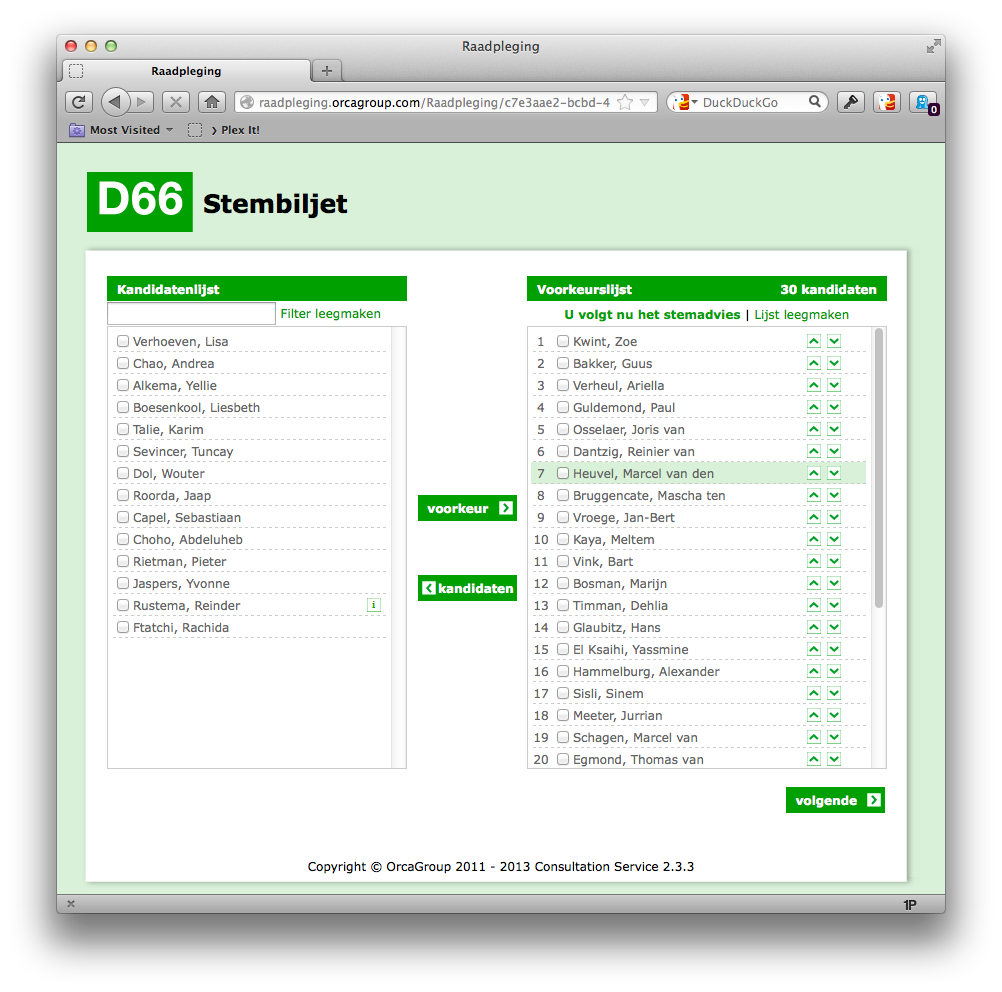 After the elections in the Netherlands on 12 September 2012 a coalition government needs to be found. According to the opinion polls this will be very difficult. No majority is possible with less than three parties. The biggest problem is the polarisation; the biggest parties will not agree to be in a coalition together. With the remaining parties it is hard to reach a majority.

Since March 2012 the parliament has given itself more freedom in forming a coalition. Within a week after the elections parliament will convene and decide how to proceed to form a government. Previously, this initiative was in the hands of the monarch. We can expect parliament to appoint someone to investigate the willingness of parties to form a coalition together. This formation is likely to take weeks if not months.

My proposal is to let parliament vote on a motion to appointment a government consisting of extra-political ministers coming from the citizenry if there is no coalition within a month. This will at least put extra pressure on the formation process. There now is a deadline, it can no longer last endlessly.

Secondly, journalists can start finding good candidates. All likely candidates can answer the question, ‘would you be a good minister?’ Usually during the formation there is no news to report. With this option open every candidate found can become news. These candidates can then explain how they would deal with parliament. Which compromises and middle ground solutions will receive a majority?

Typically, good candidates are not political figures. The required skill is to find support for a measure from a diverse, even divided, constituency. This is the position leaders of an economic sector find themselves in: education, health care, retail, production and so on. Their constituencies are often not unanimous about proposed solutions or positions. It is their skill to find the band-with they can operate in. Also managers in multinational organisations need this skill to satisfy both shareholders, employees and the legislators of the countries they produce or sell in. They often take great pleasure and pride in pragmatically advancing concrete measures within the constraints given to them. Unlike politicians who are elected for their convictions and their skill to argue that those are the best.